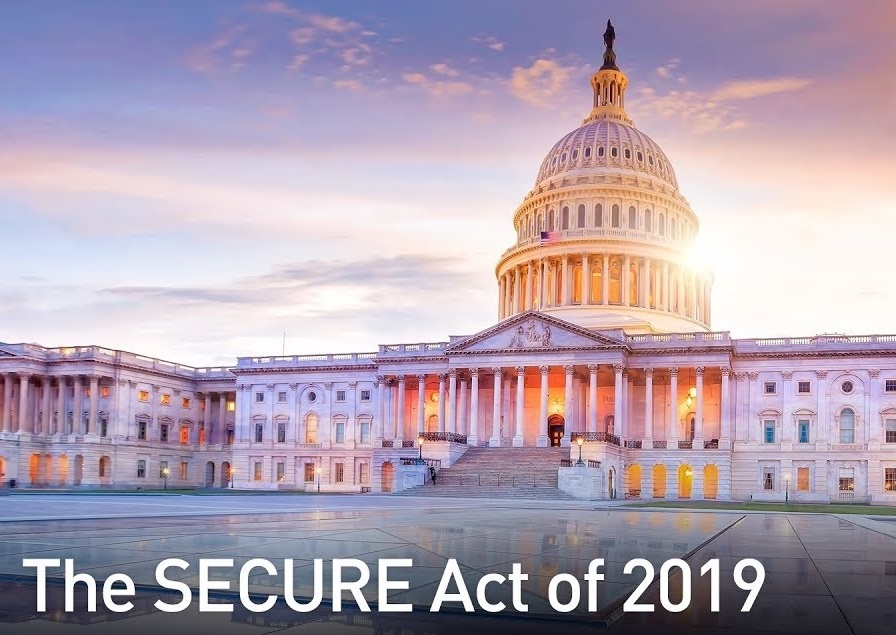 The Secure Act - What You Need to Know

After considerable delay, the Senate finally passed, and the President subsequently signed one of the most ground-breaking pieces of legislation that will affect nearly every retirement saver.  The SECURE ACT or the Setting Every Community Up for Retirement Enhancement, much like past legislation, has some positive attributes but has some considerable trade-offs that will cause individuals to rethink certain strategies.  For purposes of this discussion, I will focus on required minimum distributions for account owners and their beneficiaries, the usage of a qualified charitable distribution, and contributions to IRA’s for individuals beyond age 70 ½.

Most notably of the provisions, the ability for non-spousal beneficiaries to “stretch” IRA distributions over one’s life expectancy, has been eliminated.  In the case of a qualifying trust that is named as a beneficiary instead of a natural person, this also creates an issue as most trusts will need to be amended because of language that most likely doesn’t align with the new rules governing distributions.  What has replaced the “stretch distribution” is the new 10 Year Rule.  Effectively, the entire inherited IRA must be exhausted by the end of the 10th year following the year of inheritance.  This will result in the requirement to accelerate taxable income due on pre-tax IRA and the inability to take advantage of significant tax deferral and tax-free withdrawals on ROTH IRA’s to the same extent as what was previously available.

There are some planning opportunities for those who do not need or want to take the RMD’s immediately as it now permits you to time when the IRA is withdrawn.  For example, assume Joe Smith inherited a $400,000 IRA at age 60 but he is still employed making a salary of $200,000.  If Joe elects, he could have the distributions paid out in years 6-10 when he is planning to be retired and when he will be in a much lower tax bracket.  There is no longer a requirement to take the money out in the year after the year of death, just a requirement to fully withdraw the IRA by the end of the 10th year.

As a reminder this does not apply to spousal beneficiaries who still will be granted the ability to take distributions out over one’s life expectancy.  Other less common beneficiaries also are not subject to the 10-year rule such as disabled, chronically ill, and minor children to name a few, albeit with certain caveats.

In the case of “see through trusts”, there is the possibility that this could create unintended consequences for beneficiaries.  Most trusts have language that state the trustee may not be able to withdraw more than the required minimum distribution each year.  Because there is no longer an annual requirement to take the RMD, the RMD would be fully due in the 10th year creating a much larger tax liability all at once!  If you have a trust named as the beneficiary of an IRA, it is recommended that you consult with your estate planning attorney.

The most noteworthy provision of the SECURE Act is the postponement of RMD’s to age 72 from age 70 ½.  There is still the ability to delay a distribution until April 1st of the year following the year for which one must take their first RMD, but that would involve taking two years’ worth of withdrawals in one tax year.  This change only applies to those individuals who turn 70 ½ in 2020 or later.  As an example, an individual turning 70 ½ on December 20th, 2019 will not be 72 in 2020, and they still will be required to continue RMD’s under the existing rules.

It is not uncommon to see workers in the workforce working past 70.  There is some good news for those in that category as individuals with earned income from wages or self-employment will be able to contribute to an IRA up to the maximum contribution level ($7,000 for 2020), assuming there is enough earned income.  This allows for a non-working spouse to utilize a spousal IRA if the working-spouse has income and is eligible for a contribution even though the non-working spouse has no income.  This is a positive development for those trying to catch up for lost time.

Lastly, many of you may designate a qualified charity to receive a portion of your RMD, thus avoiding the tax due up to the annual limit of $100,000.  Even though the age to begin RMD’s is being pushed back to 72, you can still utilize this strategy if you are 70 ½.

We are still trying to sort through all aspects of the Act, but we will do our best to disseminate the information as we study the effect on each of our clients.  Conversations we may have had in the past about ROTH IRA conversions, the timing of Social Security benefits election, and establishing 529 plans for kids and grandchildren need to be revisited in light of the changes.  It is highly recommended that you consult with your tax advisors as well.